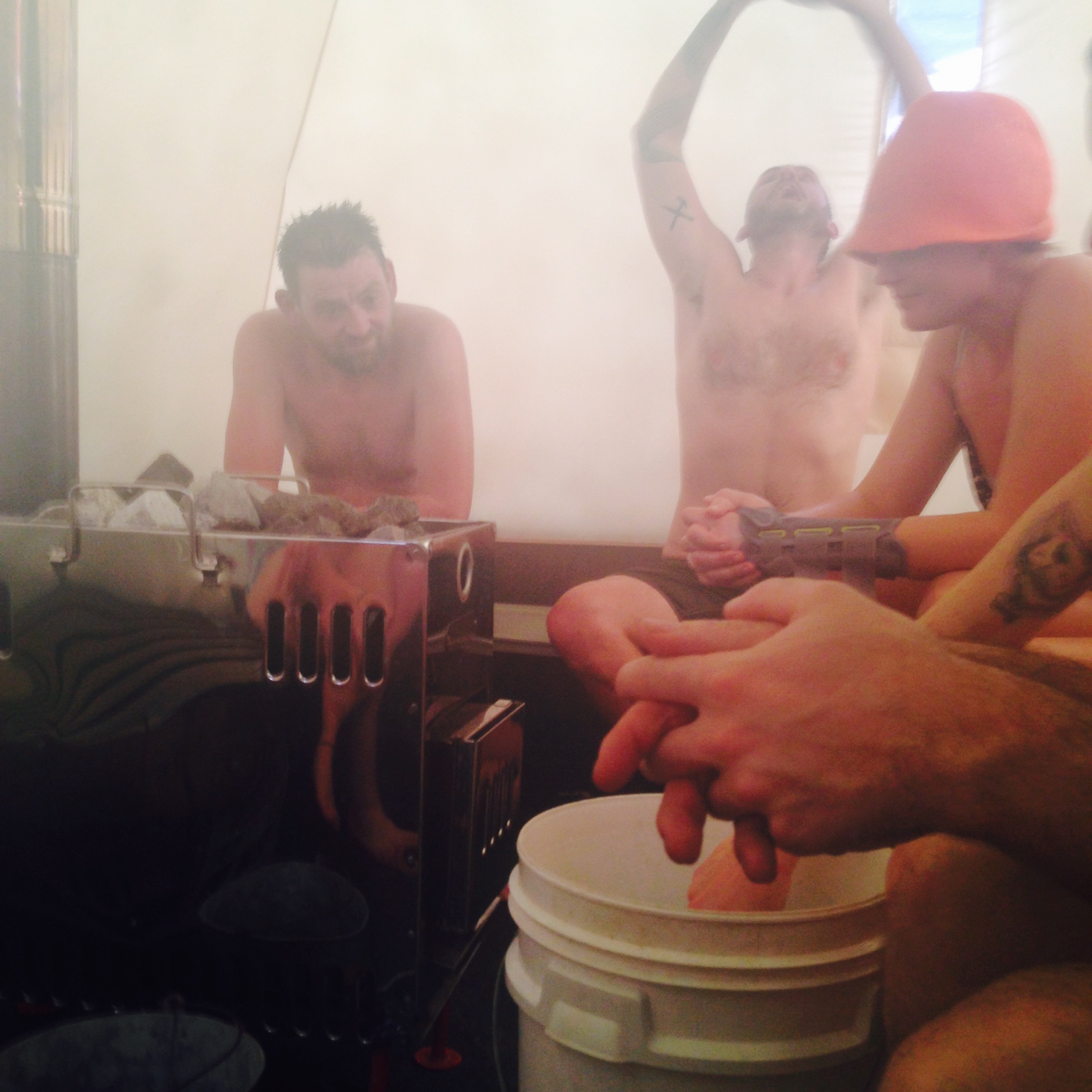 While ASBA is primarily a sauna organisation, we represent and promote all types of thermic bathing, which is often colloquially known as sweat bathing.

Most people are curious when they hear the term “sweat bathing”. The term is not common, so this page provides a basic overview and rationale, along with some examples.

A basic definition of sweat bathing

Sweat bathing is a generic term used to describe forms of bathing that use hot air, including hot water vapour.

This includes many of the types mentioned below. ASBA is called “the Australian Sweat Bathing Association” because we support a wide range of activities, not just sauna. The inspiration for our name comes from Mikkel Aaland’s famous book, Sweat (1978). The term is more inclusive than “sauna” alone, and ASBA supports this pluralistic approach to the promotion of hot-air bathing. A sauna is a sauna, but it is not the only type of sweat bath.

(*As a note of historical interest, we originally planned to call our organisation the ‘Australian Sauna Society’ (after the model of the Finnish Sauna Society) – but we realised the acronym ‘ASS’ was not going to be very helpful in promoting or inclusive and family-friendly agenda. We also realised that we wanted to create a pluralistic organisation that was able to represent a wider range of cultural traditions, hence the use of ‘sweat bathing’ as a more general term.)

This term has was first formally proposed at the XVII International Sauna Congress (2018) by ASBA president Jack Tsonis, and ASBA is working hard to establish a formal taxonomy using this as the primary category.

Thermic bathing refers to modes of bathing where heat is a central and essential feature. Broadly speaking, these modes can be split into three families: hydrothermic (e.g. hot springs, hot shower); atmosthermic (e.g. sauna, steam room); or photothermic (e.g. infrared cabin). Full details of this taxonomy are yet to be confirmed, but stay tuned for updates on this page and elsewhere. This is part of ASBA’s ongoing effort to contribute to the growth of sauna research at a global level. Sweat bathing is a fun term, but it is not scientifically strong, because it focuses on the effect of the bathing, not the method. By focusing on the method, particularly the common element of heat, many types of bathing can be classed together without awkwardly relating them all to sweat. This will result in a robust taxonomy that will encourage better scientific and social research into sauna and related types of bathing.

Terminology around sweat bathing can be confusing. People are often unsure, and the word “sauna” gets thrown around a lot.

Below we provide an overview of some common types of sweat bathing. It is difficult to provide a neat list, which is why ASBA is working to establish a more formal scientific taxonomy. The following list is not exhaustive. 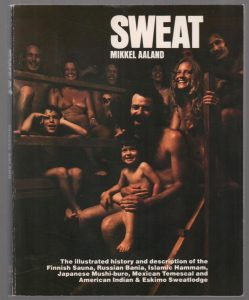 Mikkel Aaland’s book is a cult classic in the world of sauna. Published in 1978 after a three-year journey to many different parts of the world, it bears the full title:

The book is wonderful. Hard copies are completely out of print, and eBay copies are always hugely expensive ($400 and above), so you are unlikely to find one cheaply.

But thankfully, Mikkel has recently published the text as an ebook! An ebook doesn’t have quite the romance as a hard copy, but the story and information are just as good, and it is good news for sauna culture that this book is now available more widely. ASBA strongly urges you to purchase the ebook if you are remotely interested in sauna and sweat bathing. We receive no commission, we just think it’s a great book. And we want to support Mikkel, who has been a good friend of ASBA since we began.

As noted above, this book is the inspiration behind the name of the Australian Sweat Bathing Association.

Some types of sweat bathing

Below is short list of sweat bathing terminology. A few notes:

With that said, here is a preliminary overview of key terms:

Sauna is a contested term, but normally refers to the traditional Finnish wooden room or cabin, which contains a heater (either wood fire, gas, or electric) upon which stones are piled. During the bathing session, water is poured into the rocks to create steam (löyly in Finnish), which most sauna enthusiasts regard as the best part of the bathing ritual. The steam feels like deep, relaxing velvet. Typical temperatures in a sauna are 70-90 celsius, sometimes ranging up to 110C, and very occasionally beyond. The temperature does not rise when water is applied to the rocks; instead, heat is conducted to your body more effectively because of the increased humidity. Your body also gets covered in condensation, which some people mistake for sweat.

Banya is the Russian word for bath, and is an equivalent of the Finnish sauna. While sharing the same basic features (e.g. rocks, benches), banyas are often designed and used a little differently to Finnish saunas, especially the famous public banyas of Russia.

The deep historical origins of the sweat bath are unclear, but there are several ancient variations across northern Europe. The Russian banya, while not as well known as the Finnish sauna, is culturally important to almost the same extent as sauna in Finland. Finland can probably claim the crown because sauna is in their national mythology (the Kalevala), and they even keep national statistics on the number of saunas, but Russians are just as proud of the banya. This has been beautifully documented in Bryon MacWilliams’ recent book, With Light Steam. Indeed, Mikkel Aaland, in his classic book Sweat, also emphasises the cultural importance of banya and the extent to which it is beloved by the people. So although ASBA speaks mainly of “sauna”, we acknowledge all related traditions and welcome their representation in our midst. That’s why we’re a sweat bathing association.

A Hammam is an Islamic bathhouse that evolved out of the thermae (bathhouses) of the Roman empire. This link is reflected in the method of heating the bathhouse. In distinction from northern European sweat baths (e.g. sauna, banya), Roman and Islamic baths are typically large, public structures, where heat is generated through piping underneath the floor, and sometimes within the walls. Roman baths included various hot rooms, some of which were quite dry and allowed the creation of steam using the walls or the floor. The hammam saw particular development of the hot washing room, where regular use of water in a heated room creates a steamy, humid atmosphere. Such facilities are typically structured around a series of stages, where bathers move through multiple phases of cleansing. Roman thermae were almost always free to the public, and hammams are traditionally located next to mosques and incorporated into purification practices. Both examples underscore how important bathing can be at a cultural level.

The so-called Victorian Turkish bath first appeared in the UK in the 1850s. 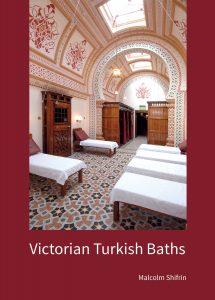 Shifrin also hosts a very interesting website about the phenomenon of the Victorian Turkish bath, which we encourage you to visit.

Some saunas can are also called Dry saunas. This is common in many public saunas, especially in Australia, where it is forbidden to throw water on the rocks (this is usually because it will break the heater, which means it isn’t a great heater). Dry saunas are perfectly fine, and make you feel pretty much as good afterwards. The opposite is a Wet sauna, where water is thrown on the rocks to make steam. Many sauna lovers, especially people from Finland, are very frustrated if water cannot be thrown on the rocks, meaning that so-called wet sauna is the default type usually meant by the the term “sauna”.

However, please note: these terms are not stable. Sometimes people will call something a dry sauna even though water is thrown on the rocks; and sometimes people seem to contrast dry sauna with the term “steam sauna”  – by which they mean an actual steam room. Such confusion is one of the more pressing reasons that a scientific taxonomy must be produced.

Traditional sauna enthusiasts (including the International Sauna Association) typically do not regard infrared saunas as saunas, often calling them “infrared cabins” instead. Because they use microwave heat, infrared saunas typically operate in a much lower temperature range than traditional saunas, generally in a range from 40-55 celsius. They usually make you begin to sweat quicker than the much hotter radiant-heat sauna, although they lack many of the sensory and social dimensions the make traditional sauna so beloved. But whether or not you want to call it a sauna, the infrared options certainly makes you sweat – and it makes you feel good too. ASBA is a sweat bathing association, and infrared is an effective type of photothermic bath, so we support its use. We also do not prohibit calling infrared a type of sauna, especially because the term is popular around the world – although we do urge people to understand that traditionalists do not accept use of the term sauna.

More importantly, what we don’t like at ASBA are spurious health claims, or uninformed opinions that infrared cabins are somehow “better” than traditional sauna. In some cases, for some people, infrared will be the preferred option, sometimes for health reasons (e.g. it appears to be a bit lighter on the heart), sometimes for preference reasons. In the same way, many other people will enjoy traditional sauna. See here for more about this.

Steam rooms are another thing altogether. These wet spaces pump hot steam into the room via a steam-head in the wall, creating a luxurious waft of cloud to relax in. ASBA loves steam rooms just as much as saunas, and we promote their expansion in our goals. Steam rooms are a particularly exciting option because they can be easier to install at home than a sauna – almost any shower can be converted into a steam room for a relatively inexpensive price. ASBA plans to include detailed information about home steam and sauna options – if you are interested, then become a Foundation Member!

Sweat lodge describes something similar to sauna in terms of basic technology, but with quite different cultural character. Traditionally associated with the native peoples of the American continent (though occurring in several other parts of the world as well), sweat lodges involve heating a small tent or earthen mound, sometimes including the use of stones for water vapour, but not always, and probably not often. Although there are a range of anthropological accounts, there is little in the way of detailed historical evidence about these ancient sweat bathing practices, which makes it difficult to make any precise statements. Sweat lodge traditions are also carried on by many contemporary practitioners in America and around the world, often rendered through the lens of neopagan or shamanic beliefs, and often involving significant cost.

Hot springs and Spas are wonderful, but it’s unclear whether they count as “sweat bathing”. Although humans can sweat in water, the act of full water immersion makes such baths feel quite different to saunas and steam rooms. This is one example where “thermic bathing” is more useful than “sweat bathing” (see above).

In general, ASBA supports a definition of thermic bathing that includes hot springs and other hydrothermal baths. They are part of the same broad family, and are equally powerful agents of physical regeneration.

Or email us at info@asbasweat.org

Or Join ASBA to receive all the latest updates